As told to Jonathan Donovan

My friends and my family see the struggle that I have to go through every single day, and they say to me, 'Why do you want to work? Why don't you just give up?' but I don't want to give up. 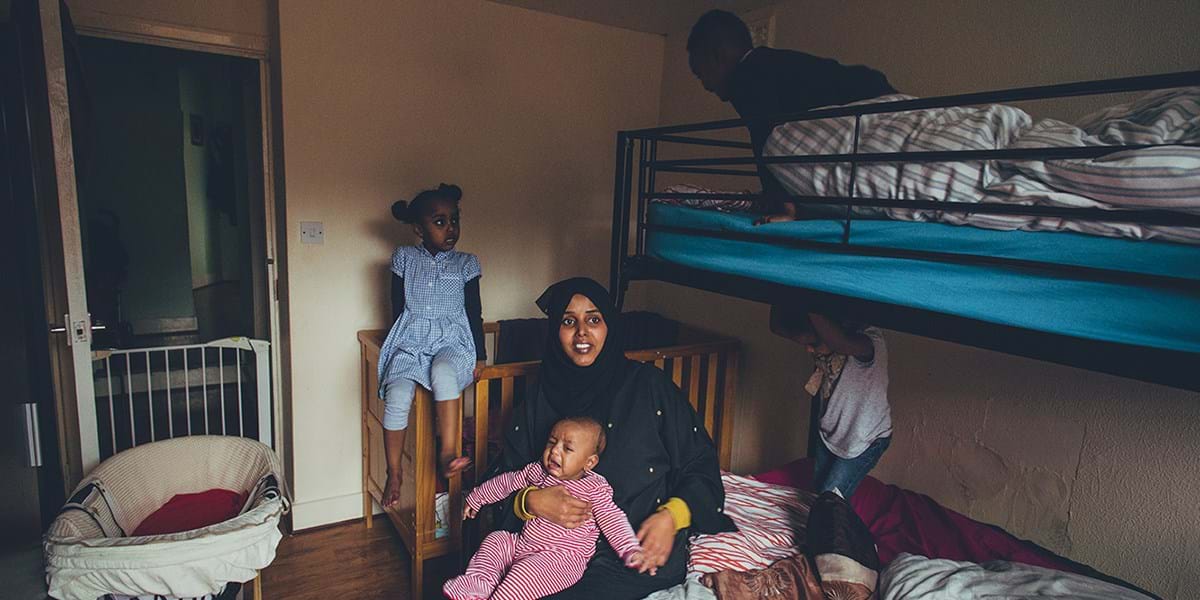 Who's going to sleep © Jonathan Donovan

I spent eight years studying, looking after sick patients, and I'm a fantastic nurse. I do enjoy nursing a lot.

I chose to have children, and I love my children to bits, but I also don't want to only be a mum. I want to be able to contribute to society.

We've been on the waiting list with our housing association, which has stopped rehousing residents now, so we just bid with our local authorities for a property every week.

I'm normally the first person to bid. Sometimes there's two properties, there's sometimes six properties. 290 families are trying to bid for the same property, but there's so many other families ahead of us.

With the nurse's pay that I receive from work, it's not possible to go in the private sector, because there's only me working at the moment. My husband got made redundant in 2012, but he's been looking for a job since he's been made redundant.

It's really depressing. It affects you mentally, emotionally, you know.

To try to keep up with just the daily challenges, of getting the kids to sleep, who's going to sleep where. Sometimes if the three older ones go to sleep, I would have to take the baby out, because the baby will come and wake up the older ones.

Sometimes because the kids haven't had a good night's sleep, I don't make them go to school the next day. Because they're so sleepy.

The two big ones have got eczema, and they itch a lot. There was times that, at night, that nobody was sleeping. She would scratch until she bleeds.

You know, having to stay with them in a room and then, as a nurse myself, having to go back out to work, to start at 7am in the morning, and then having to care for sick patients was quite challenging.

I am quite angry, because I feel like I'm working and I'm trying my best.

I'm quite proactive. My MP's aware of this, the GPs are aware, health visitors are aware.

A lot of people are aware of what the situation is, but I don't feel like anybody's listening.

It just feels like there's nothing that you can do, and I don't think anybody cares, to be honest.

This photograph and interview is part of a series called No Place Like Home by Jonathan Donovan. It is part of the Museum's Documenting Homes collection.

My time, my energy

Building your own home